Who’s been labelling things in the space?

It’s very nearly Christmas, but there’s time for us to share one more hack. 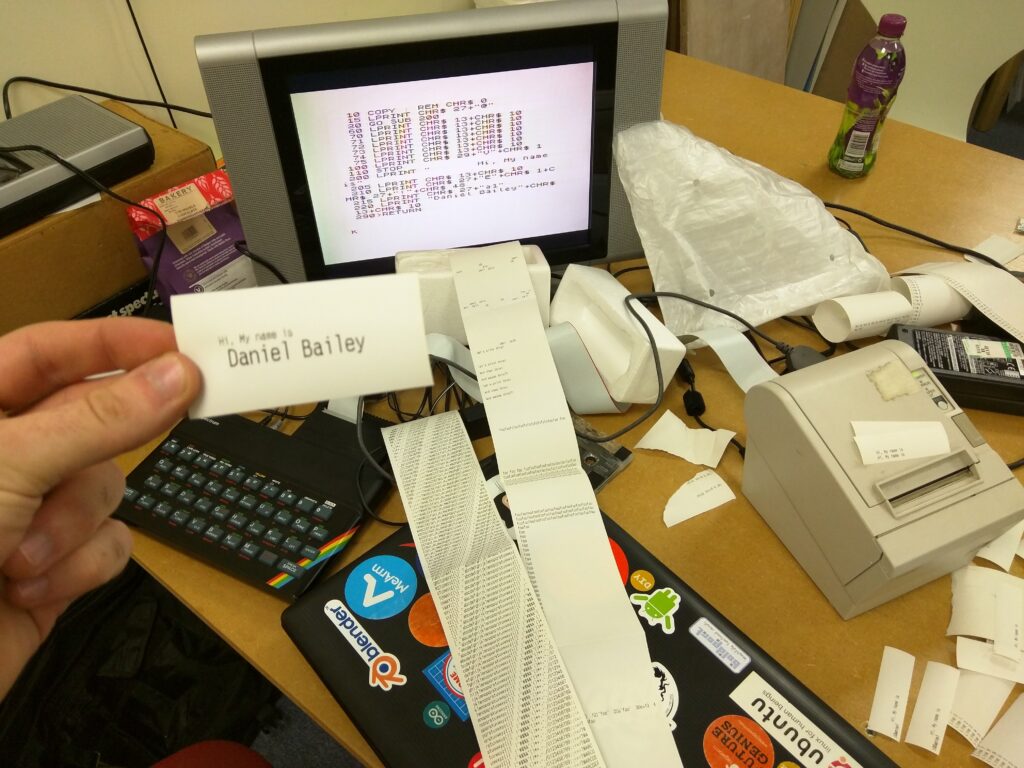 A little while ago, John brought an old till receipt printer to the hackspace to be hacked. Recently the temptation to do something with it got the better of me. You may [or may not] remember from the post about all the retro computer projects in the space, that I have a ZX spectrum that I’ve been playing around with lately. It’s a 48k Spectrum and I’ve got a Kempston Centronics E Interface for it. The centronics interface lets it talk to any printer with a centronics connection. John’s printer is actually fairly modern. It certainly wasn’t around in the eighties when the spectrum was. I think it’s probably mid-noughties era. It’s an Epson TM-T88ii. Nevertheless, it’s fairly easy to get the spectrum to drive this modern printer.

After a little bit of trial and error to get all the right escape sequences for text size, boldness, justification and cutting the paper after a print, I was able to get the spectrum to print name badges. I wrote a program that asks for your name and prints a “Hi, my name is…” badge on receipt paper. 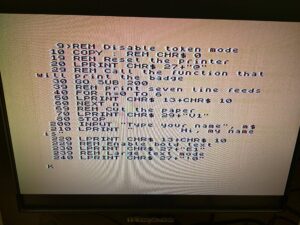 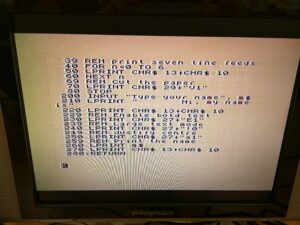 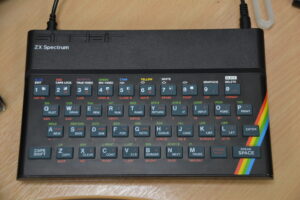 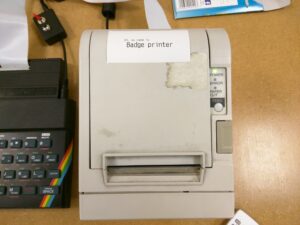 If you have a spectrum with a centronics interface and a suitable printer, you can give the program a try! The code is on github in the form of a wav file recorded direct from the spectrum used here.

A word of caution if you do though, you might get carried away with yourself. When it’s as easy as just typing in a string and pressing enter, you’ll print lots of badges. I will leave you with these photos of the many badges I left around the space.

Have a great Christmas. 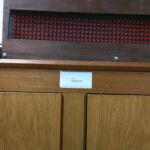 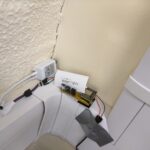 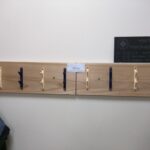 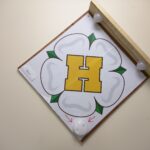 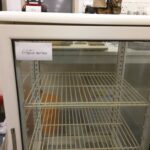 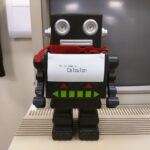 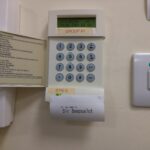 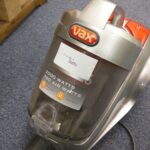 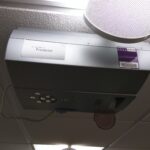 You can’t have enough retro computers

I’ve noticed that many members of York Hackspace are quite enthusiastic about old computers. As I look around the hackspace right now, I see that the ratio of modern PCs to retro PCs is about one quarter.

Most of these machines are, or have been, repair projects. I thought I’d share a quick roundup of the various machines people are working on. If nothing else, it’s a great excuse to fill a blog post with pictures of retro tech. As if I needed an excuse. This might take more than one post, so this one is mostly what I’ve been working on. 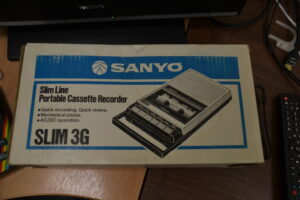 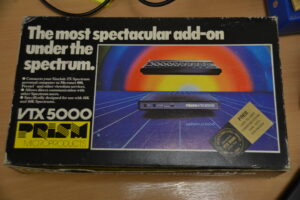 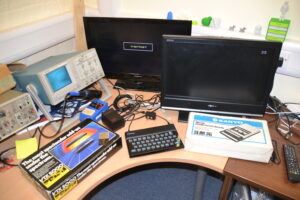 One particular interesting work in progress involves something like a cross between teletext and the world wide web. I am, of course, talking about ‘Viewdata’. In particular, I’m talking about simulating a prestel service on a modern PC and connecting it, via a sound-card-based phone line simulator, to a Sinclair ZX Spectrum. This is a project that’s been on the backburner for a while with some other members of the space, but we have two fully working ZX Spectrums and each one has a fully working Prism VTX 5000 prestel modem which allows the spectrum to connect to a prestel service. Watch this space, perhaps soon we will be able to tweet from a speccy. I tried to get a photo of it running, but sadly neither of the two TV screens in the space would cooperate. They both have analog tuners, but neither has a remote and the one with buttons on the screen couldn’t be tuned to the right frequency.

One of the two spectrums is mine (the one in the picture). This is one that I got for free from a friend, along with a cassette recorder. It wasn’t working when I got it, so I had to spend a little money on some replacement parts. There was a RAM chip missing and a blown transistor, no wonder it was free. I also decided to upgrade it from the 16k model to the 48k model. The prestel modem came from ebay along with some other stuff that I sold on for a profit. The whole thing was rather cheap.

Another repair project is this Atari 520st. The power supply needs some things fixing, it can’t quite deliver the current required to run the floppy disk drive at the moment. Even if it did, the drive belt is long gone and so we need a replacement. Would you believe that this was found in a skip, along with the monitor and a whole bunch of disks and documentation? 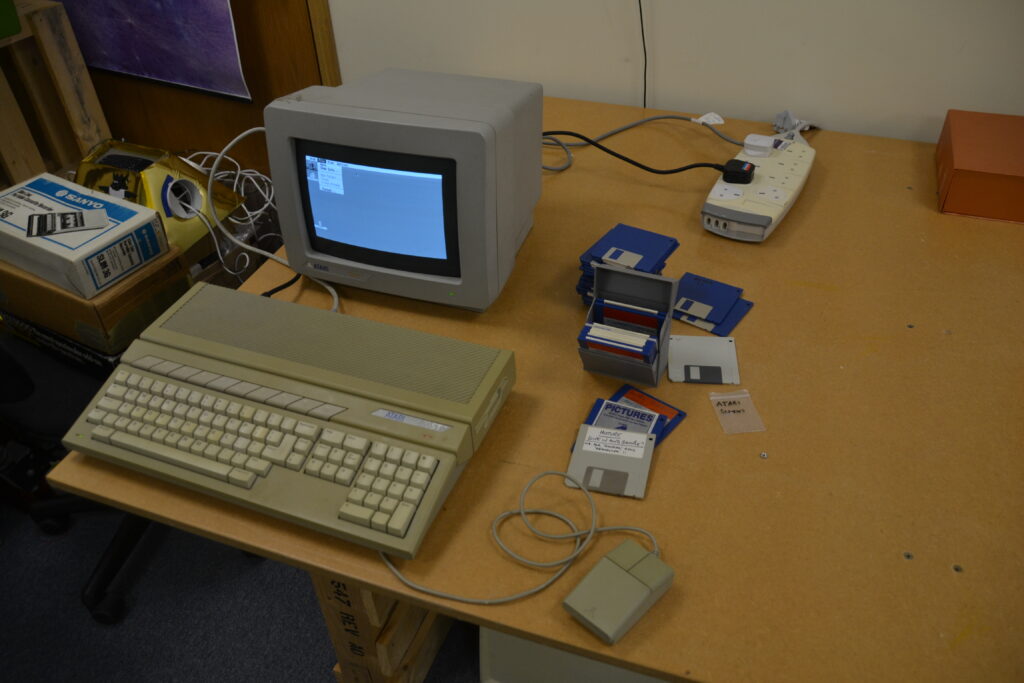 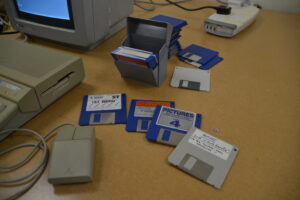 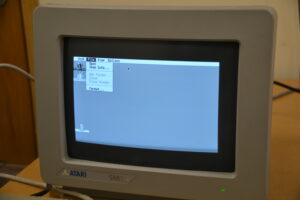 Now here’s one for the IBM keyboard fans. This is an IBM 5155. The “luggable”. It has a proper buckling spring keyboard. This too needs a little bit of work. One of the floppy disk drives is a little dodgy and makes some nasty noises, but it has two, so the worst case scenario is to just use one. It’s got a copy of IBM PC-DOS and also a 20MB hard-disk. The problem is that the hard-disk doesn’t work. That’s why it’s not installed at the moment. The hard-disk controller seems to work though, so the project here is to build an interface to allow something like a USB flash disk to be plugged in where the hard disk would go. 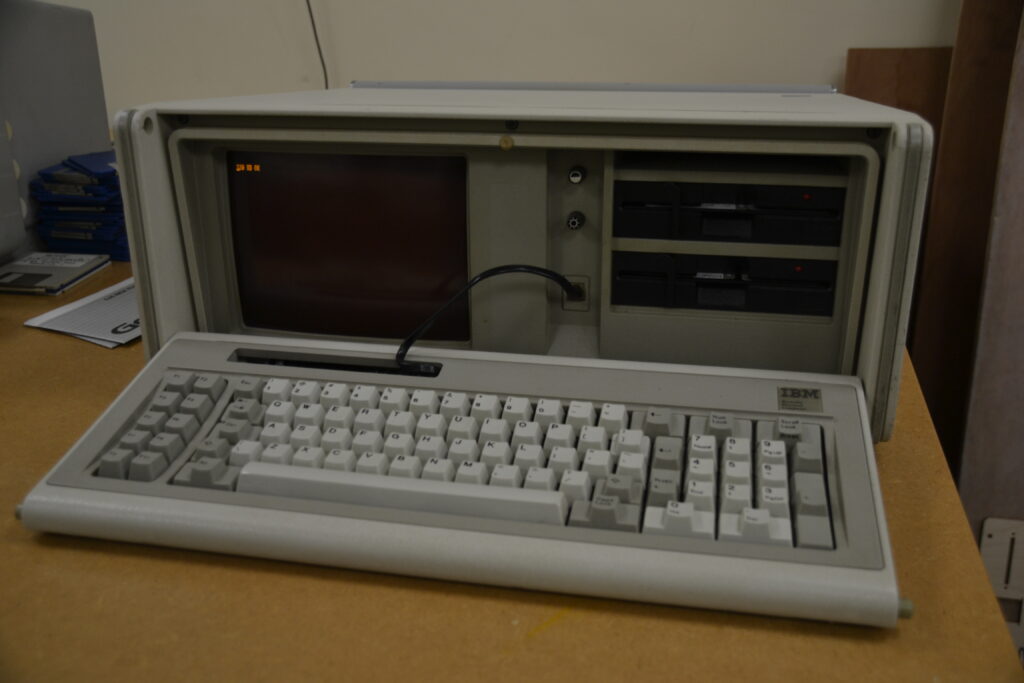 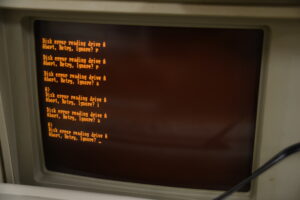 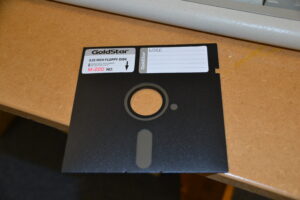 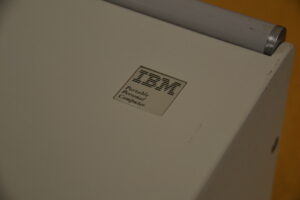 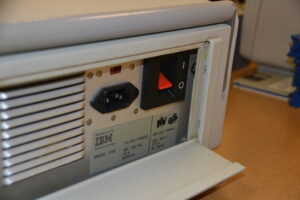 Last but not least for this post, is Luke’s commodore amiga with colour screen. This is also a bit of a rescue project. I’ll have to post more details about this one next time, but for now here is a sneak peek. He’s even got two joysticks for it, and of course he also has the obligatory “I can’t believe it’s not streetfighter” title. I can’t wait to play it. 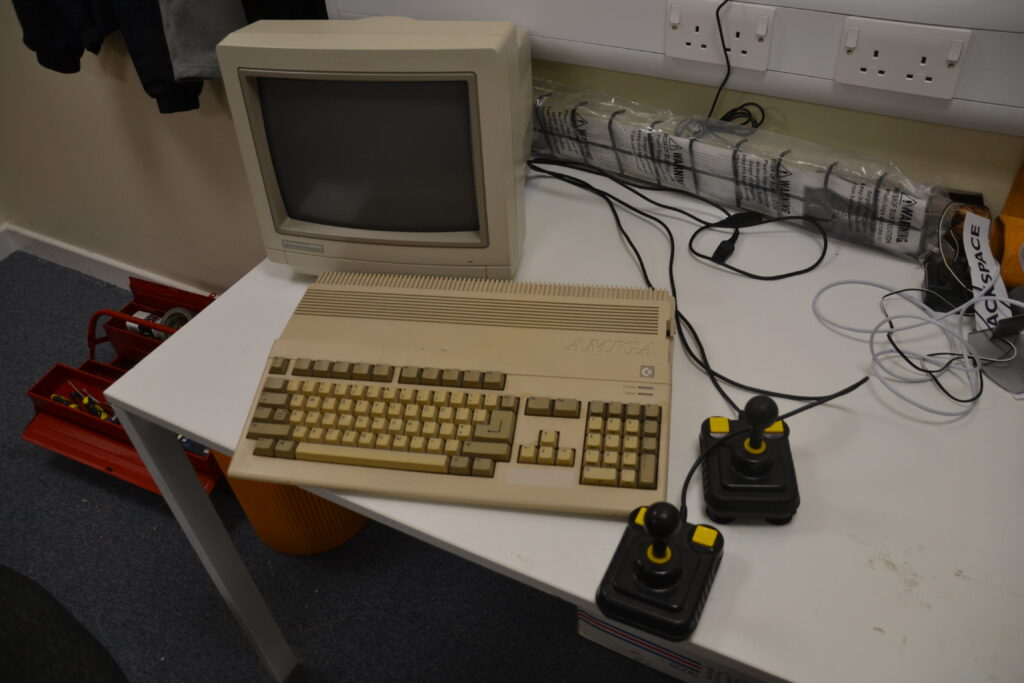 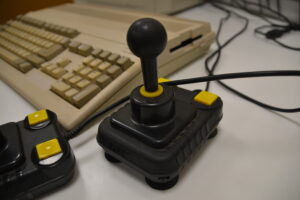 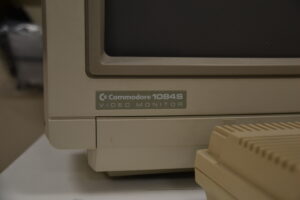 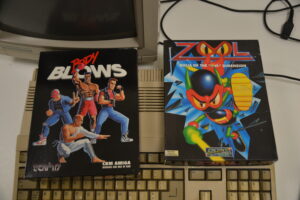 I hope you found that interesting. If you want to help out with one of these projects or just have a look at some of these machines, feel free to come along to the next open meeting. Perhaps I’ll post some more in-depth details of the projects as they progress, if there is any interest.