Just an average Wednesday open night down at York Hackspace.

Nick took an old plank from a pallet and with a little elbow grease and some shared knowledge turned it into a fine backing plate to the hold the coat hooks that he designed and printed on the space 3D printer. 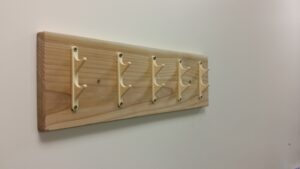 I took a very cheap hand plane and managed to get a good enough edge on it to let Nick clean up old pallet wood and turn it into quite a fine looking board. 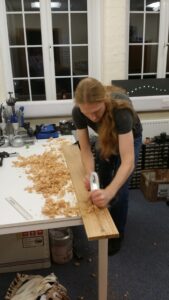 This ended up with a fine mess of wood shavings that Nick was particularly pleased with. 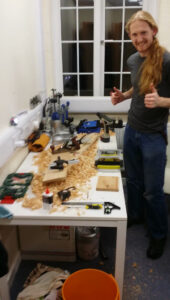 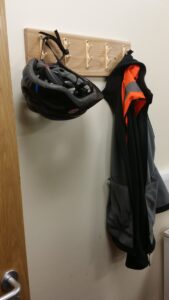 We had the loan of a PS4 and VR Headset for the night and Nathan spent some time playing at “Job” a virtual world created by the future robots to simulate what it was like to do Job in the 21st century. A lot more fun than it sounds. Everybody was enjoying his attempts to “repair” a car.

Through some more donations of kit we now have a fine looking multimedia setup in the works. It started with a projector that got attached to the ceiling. Then an amplifier and some speakers that is to be mounted on top of a shelving unit ( if you know of any spare shelving please let us know). Then through a convoluted set of connections and boxes we should be able to hook all the ageing kit up to most things. Wire lengths where measured ( in feet, meters, ceiling tiles and string lengths) and we may be able to hook it up next week. It will be useful for doing presentations or just playing tutorials from Youtube. Even the laser painting might be setup at some point.

As any true hackspacer knows things can always be improved with more LEDs and so I added a few more to his bike. Wrapped around the handmade wooden box on the front they currently provide a neat running light setup, red and white back and front then pulsing orange down the side. As they are run from an ESP8266 chip that has built in wifi it seems only a natural next step to add a wifi hotspot to the bike and a web server to control the lights. 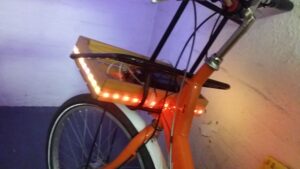 Many more things where happening. John was having some problems with his new 3D printer but was having fun developing shapes in OpenSCAD. Dave and John where discussing wiring up sheds and sharing the tools to do it. A surprising amount of time spent trying to find something to play music to test the speakers, /dev/urandom, the computers random number generator, only goes so far. I really love the mixture of physical and digital that is happening in the space especially when there is a big group. Oh and we have a new member, Carwyn.

See you all next week.