Time for another blog post about a member’s project. This time it’s John Robinson’s abstract animations. This John is not to be confused with John Cooper, who made the tetris table from a recent blog post.

John has been collecting ceramics for about ten years, and has been playing around with abstract animations of his ceramic pieces. Naturally, the project had to be called “Ceranimation”.

John’s “ceranimations” are constructed with code. He’s using a tool called AVISynth to generate the movement of the images and put them in a sequence. Unfortunately the limitations of AVISynth quickly became quite restrictive and so, to avoid repetition, John has written some ruby scripts which generate AVISynth scripts.

But it’s not just us that think it’s great, one of John’s animations has been selected for the annual Animac animation festival. So if you’re going to Animac 2017, you might well see him and his animations there.

For more details about John’s ceranimation project, you can see his website.

So without further ado, here is ceranimation with an intro from the creator:

“A collection of studio pottery provides a treasury of shapes, colours and textures.  Still images of the pots are selected, trimmed and ordered by software.  Modern minimalist and ambient music provide a matching soundscape. The screen is full of colour and movement as the pots slide, turn, merge and dance.”

ceranimation from John Robinson on Vimeo.

Here’s John with some of his ceramics and some examples of how he creates his animations. 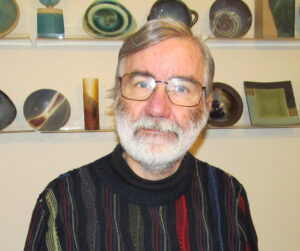 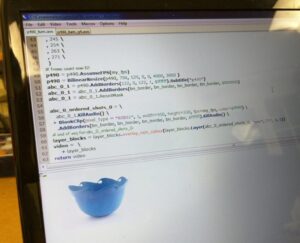 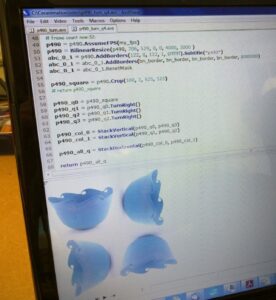 On the screens above you can see how some of his code generates groups of images in various patterns.

I have retired after programming computers for nearly half a century.  I have always loved animation, and I have made a few stop motion films as a hobby, first with Super-8 film, and more recently with digital tools.  I also make pottery, again as a hobby, and have built up a collection of studio ceramics which is threatening to take over the house.  I love going to animation festivals in the United Kindom and Europe.  Now I have had the time to combine all three pursuits in ‘Ceranimation’, my first film to be submitted to festivals.