This is the second post in a multi-part series about viewdata. A few members of the hackspace are working on a project to connect a ZX Spectrum with Prism VTX 5000 modem to an emulation of a viewdata system, providing a live demonstration experience.

Viewdata connections, much like dial-up internet access which followed later, relied on audio frequency telephone communication to transfer data between the user’s terminal and the information provider they were logged into. I’ll cover details of the signal modulation in a separate article; in this article I’ll describe how I connected a real Prism VTX5000 modem to a laptop’s sound card.

A UK telephone line, like that in most countries, is a relatively simple circuit. The line is supplied from a bank of batteries with approximately 50V DC, with earth on the positive side (to prevent line corrosion by offering cathodic protection). This would have originally been supplied via a pair of relay coils, which have three main effects:

For the purposes of our simulation, we only need the line simulator circuit to behave like a line in the off-hook state. This means it can run from a low-voltage supply of 9-12V. We’re also not interested in providing a ring signal (typically around 90V AC), as it’s also not required for this project.

On a telephone line, the AC audio signal sees a resistance of around 600 ohms. Audio signals are coupled to the phone line via capacitors, which pass the audio signal but block the DC supply.

The line simulator therefore has the following requirements:

Starting with the DC requirements, a fairly simple transistor circuit can be made to act roughly like a current source, up to near the circuit’s supply voltage. Adding a bypass resistor permits the introduction of a controlled dynamic resistance at DC, and this also affects the off-hook voltage level.

To provide the required AC resistance and injection capability, the circuit can be coupled via a capacitor and series resistor to the laptop’s headphone jack. A second resistor to ground helps to block the DC supply. A headphone output has a very low resistance of a few ohms at most. A 680 ohm resistor increases this to a more suitable level. While this is slightly on the high side, it leaves some room for other parallel resistances of a few kilohms, which the circuit will introduce.

The protection and take-off requirements can be met simply by placing two signal diodes in inverse-parallel; this limits the line signal to 0.7V peak, and also limits the extent of transients when the line switches between on- and off-hook conditions. 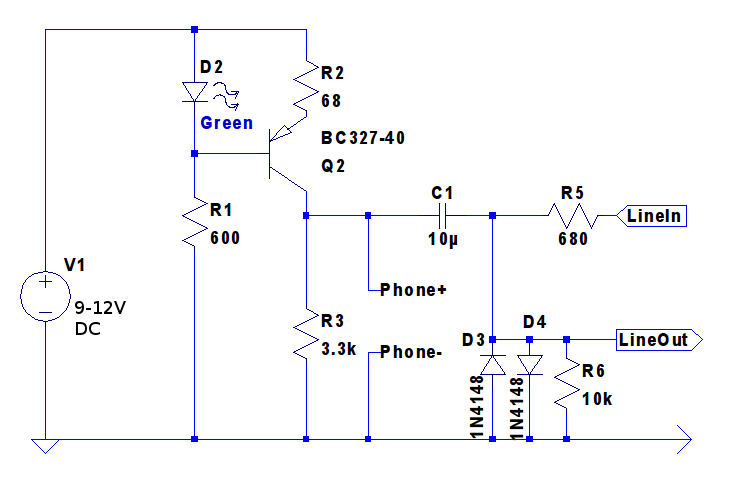 The complete line simulator circuit is shown above. The LED and series resistor are used to provide suitable biasing to the transistor. An unintended side-effect is that when the phone is on-hook, the LED supply is bypassed by the transistor, so the LED also acts as an off-hook indicator.

This circuit can easily be built on a small piece of stripboard. ADSL filters are widely available, and often going spare. These provide a suitable project box and, with the rest of the filter components removed from the board, a pair of phone jacks which can be connected to the line simulator circuit. Note that the circuit as presented is not suitable for connection to a PC microphone jack as the signal level is far too high; to use this an attenuator would need to be built in, which could be achieved with a simple resistive divider.

Once constructed, check the voltage at the phone socket is about right, then plug in an old phone to check it’s working. You’ll probably hear some quiet line noise, and the LED should light when the receiver is lifted. If you connect the circuit to a laptop or music player, you should be able to hear audio played clearly through the phone, complete with that lovely tinny quality.