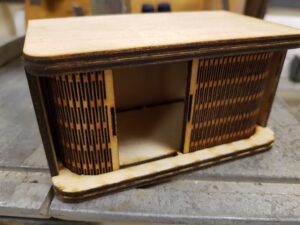 For some time now I have wanted to make a roller top desk. These are normally made by cutting a plank of wood intro strips and sticking them to a piece of cloth backing to allow it to flex. This wobbly sheet is then held in a captive groove at either side allowing it to roll when pushed from one side. This creates a curved cover that rolls away in a satisfying manner. My first thought was to cut a single sheet of A4 ply into strips using the laser cutter and then follow the classic design but then I was shown a curved laser cut panel where somebody had just cut slots in a board and weakened it enough to bend it round a curve.

My first attempt did not go well, the lines where just too close together and I ended up with a smoldering square of charcoal. But it’s quite a quick feedback loop with the laser so a quick trip back to Inkscape, which was the tool I was using to do the drawing. With the line spacing just a little further apart it suddenly worked and I had something that looked like it might get me there. It took me a little while to get to grips with Inkscape but there are some good tutorials online for most things you want to do. 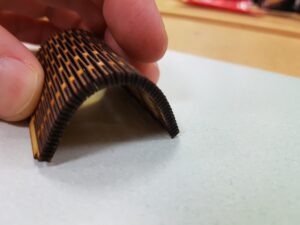 Next up was to build the box. I decided to go for a pretty simple design with top and bottom being the same. Laying out the overall bottom shape, then a second panel that was the same outside dimensions but had cutouts for the doors to run in. There where also some cut outs for the sides and back to fit. Then gluing these two panels together gave me a top and bottom. Then adding in some sides and back and squeezing it all into a single sheet of A4.

You can see in the photo that my door lines overran the doors. These looked okay in Inksape but something in the way K40 Whisperer laser cutter driver renders the SVG that does not quite seem to work. After sticking it together with some superglue and a little light sanding of the tracks and the bottoms of the doors I put some candle wax on the edges of the doors and it pushed it all together. Getting the doors in place is tricky but not impossible and I found the best way was to have them about half open and fettle them into place with a thin screwdriver and a bit of wiggling.

If you want to make one for yourself then they are up on my gitlab page: Laser cutter source files.

I’m pretty happy with the overall design and have refined the first version to round some of the corners and generally fit together better. It’s great to be able to go from an idea to a working device.