We were going to write a post a few weeks ago about our new laser cutter. Unfortunately, after a relatively short time, it stopped cutting. This post is about how we’ve gone about diagnosing the problem, since it’s hard to find this sort of information online.

Before I get into things, please be warned: Lasers used for cutting are extremely hazardous – the diffuse radiation from the laser can blind you without staring into the beam, and the carbon dioxide lasers commonly used produce a beam which is mostly invisible! Additionally, the power supplies produce extremely high voltages (on the order of 25kV – that’s enough to cross a significant air gap), and can supply enough current to produce a lethal shock (it only takes 27mA). Don’t do this unless you know what you are doing – and even then, please have someone working with you.

That being said, let me get on with the article!

Firstly – some basics. I’m not a laser expert by any means, but I’ll attempt to describe the requirements around the operation of one. A carbon dioxide laser relies on electrical excitation of the gas molecules to produce radiation, which leads to laser operation. To excite the gas, a high voltage must be applied to the tube, which ionises the gas and “strikes” the tube. Once ionised, the gas begins to pass electrical current, which then sustains the laser operation. For our tube, around 25kV is required to strike it, after which the voltage reduces to around 2kV. The power supply regulates the current supplied, to stabilise the power output of the tube.

The aim of our diagnosis was to determine which of these components was most likely the cause of the fault:

We’d already eliminated the basics – mains power issues, fuses, etc. The next thing we checked was whether there was any sign of laser power. Once we’d determined there was no sign of laser activity, we flipped open the laser cover to observe the tube. We could see some faint glowing around the electrodes, which suggested that there was some ionisation of the gas, but not enough to strike the tube.

The first thing we attempted to rule out was the panel controls. We found the data sheet for the laser supply. The power supply has a regulation input of 0-5V, which controls the current to the laser. On our cutter, this is directly wired to a potentiometer on the front panel. We checked this using a multimeter, and verified that the output varied smoothly, with no jumps or dirty spots. We also checked that the test button was able to drive the input terminal on the power supply, that the panel ammeter was able to pass current, and that the wiring was sound.

Since we had no guarantee that our laser tube was OK, we needed to create a test circuit that “looked” like a laser tube to the power supply. This would then provide a means to check whether the power supply was able to produce the high voltage required to strike the tube, and whether it was capable of supplying the current to sustain operation.

Since testing the supply’s sustain current was the simplest thing to do, we calculated an appropriate resistor value to load the supply. As we knew our tube was a 40W model, and worked at about 20mA current, we chose a 100kOhm resistor (20mA into 100k produces 2kV, 2kV x 20mA = 40W). We purchased a large, high wattage ceramic coated resistor for this, both to ensure sufficient power dissipation, and to be certain the high voltage wouldn’t arc over the resistor. The resistor was wired in instead of the laser, and we used the earth terminal on the cutter’s chassis as the return path, after verifying that this connected to the power supply’s return terminal. We also connected a 100 ohm resistor in series, at the earth side of the power resistor – this provided a 1000:1 resistance ratio, which was suitable for connecting a voltmeter to, so we could see the voltage produced by the supply.

We began testing with our control potentiometer turned all the way down, and tested for a few seconds at increasing levels. The result showed a gradual increase in current with no sign of a problem. We then held the supply at its maximum current (which was about 18.5mA) for 10 seconds to check it produced a steady current. 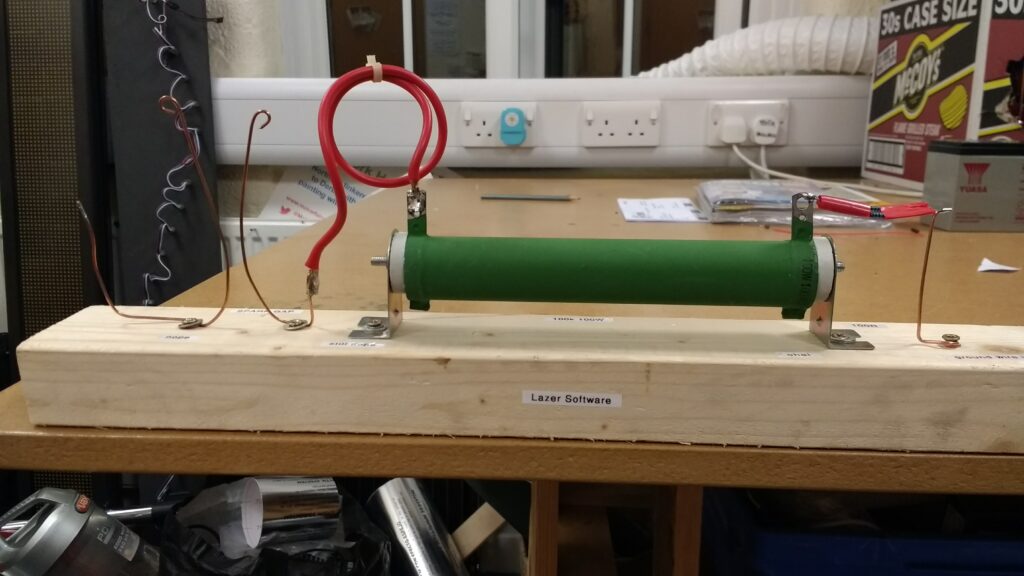 To test the striking voltage, we used a simple spark-gap setup in series with the resistor. Dry air has a breakdown voltage of about 3kV/mm. We used some bare copper wire to assemble a simple gap which could be varied by bending the wires. While this didn’t provide a way to directly measure the striking voltage, the gap would provide an approximation – with the rest of the circuit acting as a realistic dummy load and providing a means to check the current and running voltage.

Starting with a gap of about 1mm, we tested the supply. At 1mm, we got a nice clean purple arc. Increasing the gap, we got to around 3mm before we hit trouble. At this point, the breakdown voltage was about 9kV, but the supply would only strike with the control potentiometer in a particular position, and wouldn’t sustain operation. Increasing the gap further resulted in no striking at all.

As the laser required around 25kV to strike, this setup should have worked up to a gap of about 8-9mm, so we were quite far off.

This seemed to indicate a problem with the power supply – most likely, some form of insulation breakdown in the flyback transformer.

We’ve since ordered and installed a new power supply, and I’m pleased to report that the laser cutter is now back in working order!