Extra Open Evenings in May. Come and look around. 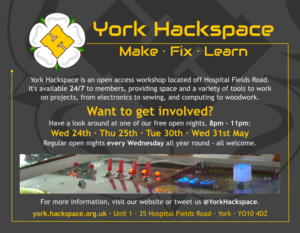 Open Evenings at the space in May.

We’ll be running a couple of extra open evenings on Thursday 25th and Tuesday 30th May for people who want to come and look around the hackspace but are unable to attend our regular Wednesday night open evenings.

See https://york.hackspace.org.uk/wiki/Weekly_Open_Evening for more information including how to find us!

Corduroy aprons are this year’s must have hackspace accessory

I decided that I need an apron. I mostly turn up at the space in whatever I am wearing from work and sometimes things might get messy. An apron should do the trick but as it’s a hackspace I can’t just buy the first one I see. So it’s time to break out the sewing machine. 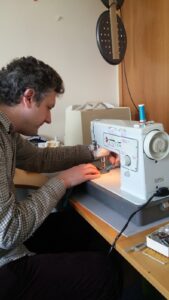 First off I needed a pattern or something to to copy from. Luckily Aimee already had something so I set about finding some suitable material. Traditionally these things seem to be made from something like a heavy cotton or even leather. I went for chord. Brown chord with blue trim.

I laid the pattern apron out on the big table over my cloth and after some pondering we decided to mark up a rectangle of the right length and width and just mark up the curved parts that go under the arms from the pattern. A small bit of scrap ply-wood was brought in to use as a square to get things lined up and a point of no return was passed as I made the first cut. Pinking shears are great fun, it’s like setting an alligator to work and you end up with a zig-zag cut that should not fray.
I added a centre line to help keep things lined up then chalked out the curve from the template apron. Then cut both curves in one with the sheet folded in half.

Now for some practice runs on the machine. It’s been a while since I last had a go with this so here was some browsing of the PDF copy of the manual to see how it threads together. Then some tweaking of the tension to get it sewing right on the chord. ( I make this sound simple but I think this bit took almost the most time but I now consider myself an “expert” ) I added a plain hem along the bottom and its almost straight. 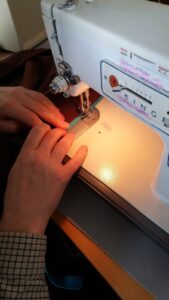 For the first attempt to attach the tape round the sides I used pins the tape in place I found that it moved about too much and the pins then made it to difficult to correct so I switched to just feeding things in an adjusting the fold as it went which worked quite well. In the end I had to unpick things quite a bit on the first run but then worked out that I needed to have a bit more tape on the front or it would work itself out. 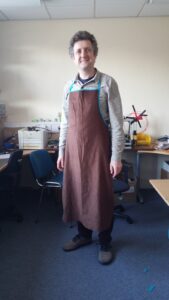 Then finally adding on the the loop round the top and the strings round the back and it was done.

It may be a little long and I should have made the strings round the back, up the sides and around the neck from the a single piece. I also think the bit under the neck is a little to wide so it sticks out a bit but other than that I’m pretty happy with it. ( Oh and it could do with an iron, we should probably get one for the space)